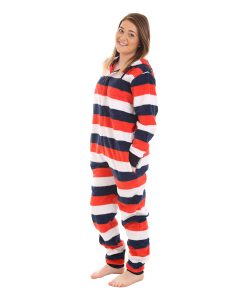 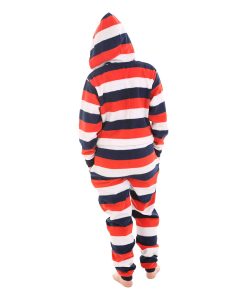 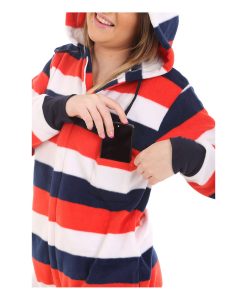 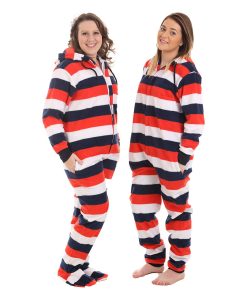 Order now and we will deliver fast from a US warehouse using the reliability of Amazon fulfillment services as standard. You can be enjoying good ol' Red White n Blue in just a few days. There are seven adult sizes to choose from and cut is unisex so can fit most men and women – just base it on the height of the wearer. You can opt for a footed or unfooted version or one which includes a rear zipper as a Butt Flap. And check out our Red, White n Blue socks with non-slip soles.

Sizing is simple, check the size guide below or just base it on the height of the wearer
SKU: N/A Category: Adult Onesies Tags: Fleece, Hooded, Matching Socks, Unfooted, Without Buttflap
Categories
Having Trouble?
Just email us
info@funzee.com

We know you like striped adult onesies so here is a new design called Red, White n Blue because it comes in Red, White n Blue stripes. Its made from warm polar fleece and is hooded and with pockets. Red White n Blue may refer to any tricolor flag or banner having the three colors of red, white and blue. And we all know the greatest nations in the world have  flags of red white n blue. Of course we mean the United States of America, which uses stars and stripes on its flag, and Great Britain which uses the cross of St George and the cross of St Andrew. But there is also France, Australia, Iceland and many others. Red White n Blue is also a brand of American beer, a fictional trio of soldiers from DC Comics, a 2003 song by Lynyrd Skynyrd, a not too great 2010 film  – scores 78% from IMDB (Erica is emotionless and jumps into bed with any man she meets, until she discovers the kindness of strangers…blah, blah) and Red, White n Blues is a 1992 album by The Blues Brothers. That’s surely several reasons for everyone to want this adult onesie which comes either unfooted (but we have optional matching non-slip socks) or footed and there is even a version with a rear zipper to act as a Butt Flap. You could wear it out on July 4th to show your independence or just use it as cozy sleepwear.

Red, White n Blue like most of our Funzee designs comes in seven adult sizes so that most people will find a fit suitable for them. You just need to choose the size based on the height of the wearer. This is a high quality product at a great price but if you want something different just let us know.

All measurements are in inches and for the body, not the garment