If you think that onesies are just for kids, you might be in for a big surprise! There’s a wide selection of the population out there that wears adult onesies. In fact, the origin of these fun pajamas can be traced back to the 1940’s when they were commissioned as a flight suit to protect pilots and to be worn in air raid shelters. It seems that the adult onesie has grand beginnings for such a humble product! Nowadays, they’re mainly worn to lounge around in, sleep in, and as a novelty for parties or other events. Most of them are made from fleece, cotton, or other breathable and comfortable fabrics.

After the 1940s, adult onesies gained popularity in many professions such as bricklaying, constructions work and mechanics. Worn over their own clothing, adult onesies protected material from the harsh environment and chemicals of many professions. Winton Churchill became very famous for helping to invent what would be known as the ‘siren suit’ – named after the air raid sirens of the World War Eras. Before that, adult onesies were often called ‘union suits’ and were marketed to men in the late 1800’s as an alternative to other constrictive and uncomfortable clothing. You might remember union suits from their red flannel appearance and drop seat to allow easy access to personal needs without the need to take off the garment. Todays modern equivalent of the union suits are commonly referred to as ‘long-johns’. 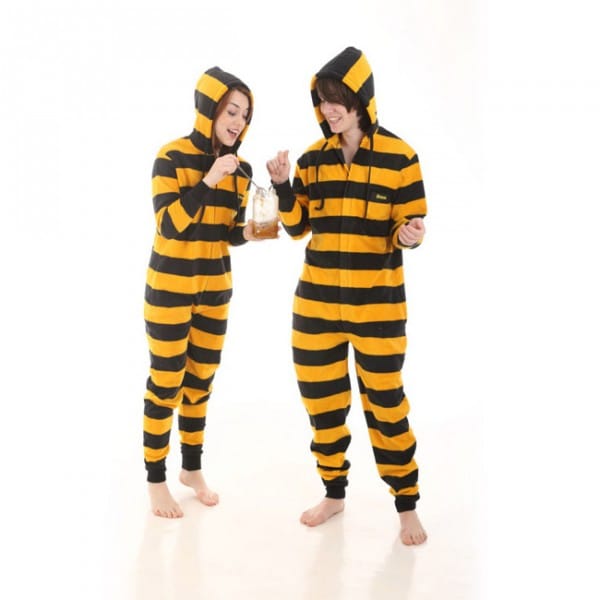 Today, children, men, and women wear adult onesies all over the world! Stylish, affordable, and comfortable; Funzee Adult Onesies feature a variety of fun designs that can be worn during play, leisure, and work. Famous adult onesie wearers include actor Brad Pitt and members of the popular boy band, One Direction.

Funzees really are becoming one of the hottest fashion trends of the 21st century! With our sleek and modern designs and some of the highest customer service ratings on Ebay and Amazon, you know that you’re getting a great product, at an affordable cost, with a no-hassle and 100% satisfaction guaranteed return policy. Just think of how you will be the life of the party when you show up wearing our yellow and black striped Bumble Funzee or blue and gold Sunshine Funzee!

When you purchase from Funzee, you can expect quality merchandise and outstanding service! Make sure that you check back regularly to get all the latest and greatest that Funzee has to offer.